There was a lot of show and tell of lovely, creative, colorful and clever items made by the attendees. There were also several items made and donated for the community service project of quilts for those graduating out of foster care. These included quilts as well as heart blocks. If you haven’t made at least one heart block to contribute, it is not too late – you make the blocks (any size) and Kathy Wickham will organize them into quilts – how easy is that? 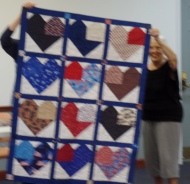 Show & Tell – slideshow above
Carol Zaleski and Loretta Twiford showed their landscape pieces made at the May meeting under the direction of Tina Dietz.
Vickie Hammond showed a flannel twin size quilt she had made for her son and family for their camper. On the back side she embroidered the family name in large letters. Very nice. Oh, and for the binding, she secured the edges with a decorative sewing machine stitch ! Clever. Janice Taylor showed two fleece blankets with tied fringe edges she had made for her grandchildren, and her Spring Flowers table topper she made from the April meeting and Tina Dietz’ instructions – it came ot very pretty. Then she showed a sewing machine needle carrier, the pattern for which was shared by Claire Hightower. She also made something for her Honey, a screwdriver roll-up – very clever. Ann Ware showed her very nice Party on the Block quilt with a musical theme. Kitty Yates showed a quilt she made with a bow tie pattern on point and it was very nicely done. Cathy Henderson had several items, also – a summer applique wall hanging with the satin stitching making an interesting pattern on the back; she had made a Fidget quilt as well as a quilt she made from an orphan block where she had designed and constructed the rest of the quilt and had used her rulers to quilt it. Cathy demonstrated her rulers at the March meeting and further information is in the March newsletter (she made it look so easy!). Cathy also had a Mario panel quilt for her grandson, to whom she referred as Super Mario himself ! Kathy Wickham showed a table runner made from 3rphan blocks. Next were two little doggie blankets from scraps, and another table runner. 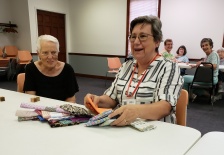 Then came Game Night . . . what a fun packed (and informative) night it was, too ! We played fabric and buttons bingo, had two person teams for quilters’ Jeopardy and then something called Left, Right, Center – who ever heard of that – but it turned out to be exciting with one big winner in each of our two groups.

In quilters’ Jeopardy, in lieu of a buzzer each pair of players was given a quilting word to shout out in order to answer the subject with a question (you know, “what is . . .”). There were 3 categories, quilting history, quilting tips and blocks. I don’t think there was one “question” that someone didn’t at least hazard a guess at answering. Did you know that quilting originated in China all those eons ago? With Egypt coming in a close second ! Egypt ! Who knew ? Then we went on to play Left, Right, Center. We each started out with the 3 fat quarters we brought so we each started out rolling 3 “dice” or rather large wooden cubes. On each die was a L (left), R (right), C (center) and a dot (you get to keep your fat quarter). You throw the dice, read them and follow what they showed – sometimes you got to keep your fat(s), sometimes you needed to pass one (or more) to the left, to the right, or toss one in the center. As your pile of fat quarters diminished, so did the number of dice you threw (2 fats, 2 dice,1 fat, one die, etc.). Some of us went through our fat quarters quickly while others continued to play. The excitement mounted until there was only one winning player left with a fat quarter in front of them – at that point, the rest of the fats were in the center and the lucky winner got to claim all of those fats as their prize !! Whew ! The lucky winner on one side of the room was Ann Ware, on the other it was Janice Taylor. Fabric and buttons bingo was looser in its rules and at the end of the day everyone got at least one bingo and went home with a prize. As the song said, oh what a night it was, it really was, what a night.

On July 9th, guest speaker Donna Kittelson from Star Quilters Guild will talk about miniature quilts – we are talking small quilts !! See you then.